The chronicle of a verdict foretold: guilty as charged

by Ofer Engel
The website Electronic Intifada (EI) published two accusations against me, one on October 10th and one on October 16th 2012.According to the posts, two individuals using the pseudonyms “Maissam Nablussi” and “Walid Jabari” do not exist, their accounts  "deceptively operated" with the intention, it appears, to “infiltrate activist communities.” This, it is claimed, had a "destructive impact" on the community of Palestinian activists. Furthermore, the posts lead EI readers to believe that I am not genuinely advocating for human rights but rather serving as the Trojan horse for Israeli agencies.

To elicit the information, the EI launched a cyberbullying campaign that included blackmail, threats and extortion against me and against my friends, some of whom do not wish to be associated with this sordid affair. They fawned and bullied people, coerced information, demanded that we betray our fundamental rights, namely our right to privacy and the privacy of our friends. I was told that I must collaborate with the 'investigation,' or else EI will publish more damning 'evidence.' I have been given an ultimatum that the EI will inform my academic advisers unless I cooperate within a limited period of time. I have been threatened that if I do not admit to actions I have not committed, additional incriminatory 'details' from my past will be presented as “evidence” to EI readers. As some commentators have rightly remarked, it is rather ironic that the very actions of the EI authors are examples of the kind of behavior they accuse me of engaging in. 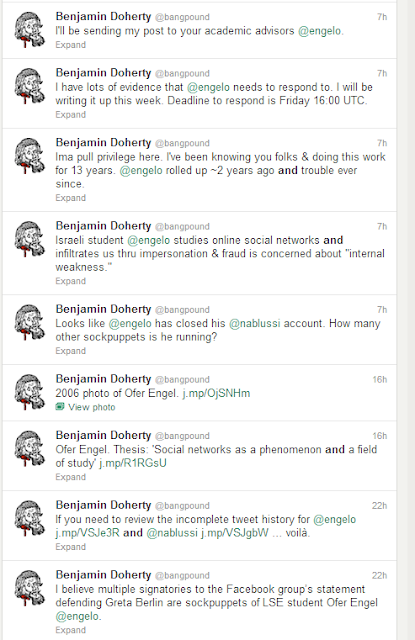 The result of the aggressive cyber-bullying campaign was two lengthy posts, about 4,000 words in total, written with complete confidence and no caveats. The authors raise no questions, nor do they entertain the possibility of an alternate interpretation. They explicitly claim: “Israeli man who impersonated Palestinian woman is linked to Free Gaza debacle and photo hoax”. No maybes, no qualifications, no doubts, no reflection about what this campaign is designed to achieve.

I am neither “Maissam” nor “Walid”, both of whom exist in real life. As individuals, they have a right for their privacy to be protected. For that reason I will say nothing more about them. My academic research has no connection to my modest activism. I am emphatically not an Israeli agent, an insinuation that amazed me as much as it shocked me.

Is it possible that my “Jewish-Israeli” sounding name played a role in this attack? After all, it is a common belief that governmental agents infiltrate the ranks of activists, a suspicion that may well even be true. However, in focusing on me, the EI erred. My commitment to the Palestinian cause has been consistent; I have participated in several demonstrations and related events for the support of the cause in Berlin, Munich, London, Boston, Tel-Aviv, Bil’in and Nabi-Saleh. In private circles, I tend to defend the Palestinian cause and be critical of Israeli policies. I have nothing to hide and I do not regret my participation in various events, even though expressing my opinions has come at some personal cost.

The debacle has damaged me and others immeasurably. My name is now associated with outlandish accusations based on circumstantial evidence. My professional career may be at risk and I have been flooded by hate messages. All this to what end, exactly? How does EI benefit from engaging in acts of cyber-bullying? What goal does this “exposé” supposed to serve? With these tactics, isn't the EI damaging the very cause it pretends to defend?

Obviously, the EI posts are baseless rhetoric, a result of amateurish (not to say downright embarrassing) investigative journalism. But this incident leaves some critical questions about the underlying motivation of EI's editors unanswered. What drove them to publish this story in the first place? Why would the EI put so much effort to investigate my private affairs, the details of a completely marginal bystander, an observer with very little influence and minimal importance? Why would they bother reading and analyzing hundreds of private tweets with such passion and obsession? I do not have a definite answer. But if it is possible that my identity is what set this roller coaster in motion, this begs the question: what is the role of people with my background in the struggle for peace and justice in the Middle-East?

Political activism is a marginal interest of mine, and I suppose that dust will soon settle on this affair. Still, I found it might be useful to write this brief rejoinder in order to clarify my position, and in the hope that the EI will consider posting it and apologizing for the damage it has done to my reputation and that of my friends and colleagues. But beyond my immediate personal concern, there are far reaching issues that this incident raises. Particularly important is the question about the role of Israelis who are critical of their government, their presence among activists for Palestine becoming more visible and their participation more vigorous. I can only hope that this incident will prompt a serious debate about such questions, and that as a result, others will be spared the fate of experiencing the chronicle of a verdict foretold: guilty as charged.

I thank my friends who have stood by my side with infinite generosity and endless support in these very dark times.I did not expect to receive so much love and kindness. I learned that some people's kindness can be as surprising as other people's cruelty.